Ever since they skyrocketed in value in 2021, NFTs have been evolving at a rapid pace, with new ideas and artworks being released each month.

However, even though there have been lots of innovative NFT projects in the past few months, there were also some that didn’t really sit well with the community.

One of the most recent examples is the Madonna NFT collection.

Although Madonna is no stranger to controversy, her NFT collaboration with Beeple (Mike Winkelmann) raised a lot of eyebrows in the crypto community.

The main reason is that the Madonna NFT contains explicit footage of the singer’s genitalia and displays her giving birth to butterflies, trees, and robotic centipedes.

In this article, we will elaborate on what the Madonna NFT project is all about and walk you through all the important details.

The Madonna NFT collection consists of 3D tokens that include an explicit video of the pop icon’s avatar giving birth to trees, butterflies, and centipedes.

To create this collection, Madonna collaborated with one of the most famous digital artists in the NFT community – Beeple (Mike Winkelmann), who made headlines last year when he sold an NFT token for $69 million.

All of the images found in the video were created by using a Madonna 3D scan of her full body scan, a process that took more than a year.

However, due to the graphic nature of the Madonna nude NFT, which includes a full-frontal view of her vagina while giving birth, many members of the crypto community weren’t very pleased with the project.

Some of the backlashes that occurred included a tabloid calling her work a ‘filthy attention grab’, while a lot of users on Twitter targeted the singer with misogynistic messages.

Madonna defended herself by saying that she is only showing something that all women from the beginning of time have been doing – giving birth.

She explains that she found a way to do it on a more ‘existential’ level, saying that she is essentially giving birth to art and creativity.

As we expected, Madonna’s NFT became a sensation on Reddit, where we can find so many discussions and topics of people trying to explain Madonna’s nude NFT says she is giving birth to art.
Many Reddit users criticize the POP Queen for this behavior, while there are a lot of her supporters and people who like everything she does. One is certain, whether you can enjoy it or not, but none can ignore Madonna’s NFT.

Mother of Nature is the first piece of the Madonna vagina NFT triptych.

The scenery takes place in a futuristic laboratory setting, with no sign of living life anywhere around. Suddenly, the video captures a branch coming out of Madonna’s vagina and it transforms into a beautiful and healthy tree.

Flowers bloom and the tree continues growing against gravity, and while it seems that it might break, it ultimately flourishes. 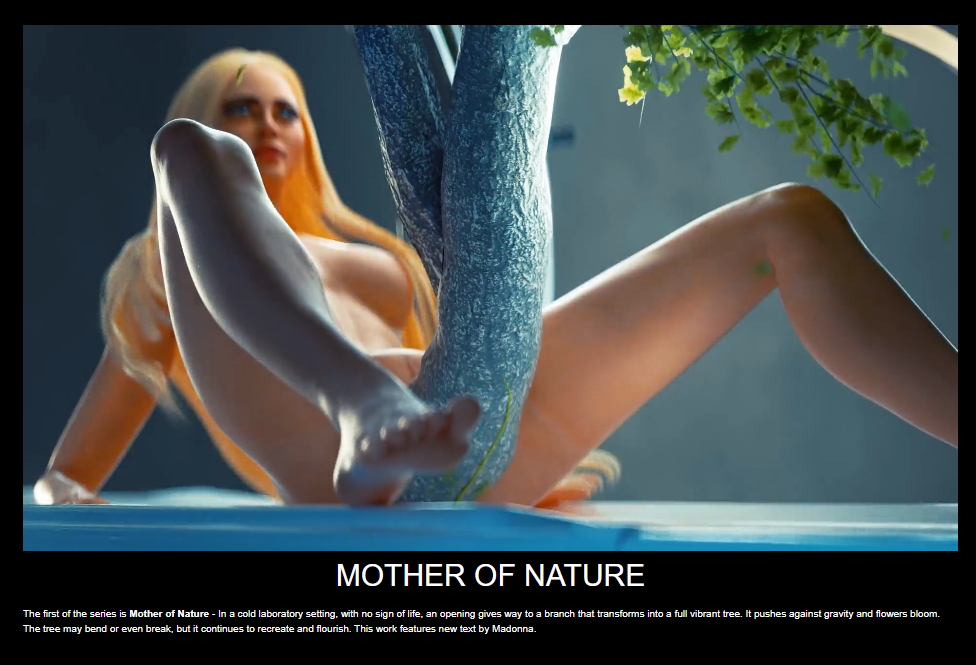 Since Mother of Nature was her first-released NFT, it was also the first one targeted by critics.

Madonna defended her ground by stating how women have always lived under the male gaze, and that they are constantly pandering to what others think that they should do.

She also states how creating a work of art is often a big challenge, and most of the time, it isn’t a pretty process. 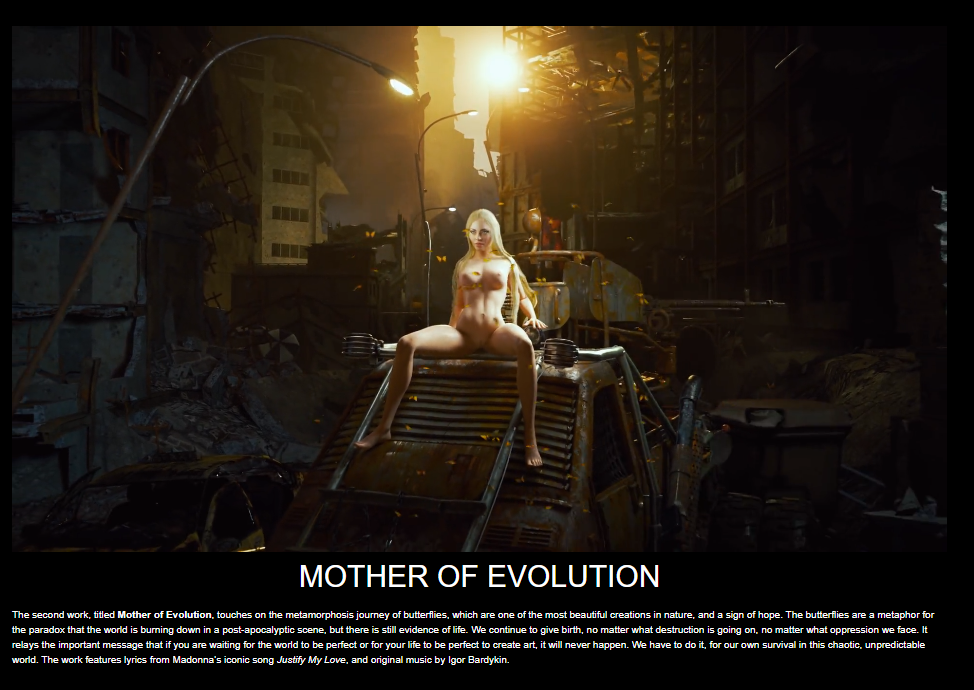 This video captures the transformational journey of butterflies, insects that stand out as one of the most beautiful creations and are universally known for being a sign of hope.

While the world around them is crashing down in a post-apocalyptic scene, the butterflies show that there is still life on the planet.

Despite the destruction that is going on, Madonna continues to give birth to them and conveys the message that there is no perfect moment to create art, it’s the only mean of survival in an unpredictable world.

Additionally, this NFT also includes lyrics from one of Madonna’s most iconic songs, “Justify My Love”. 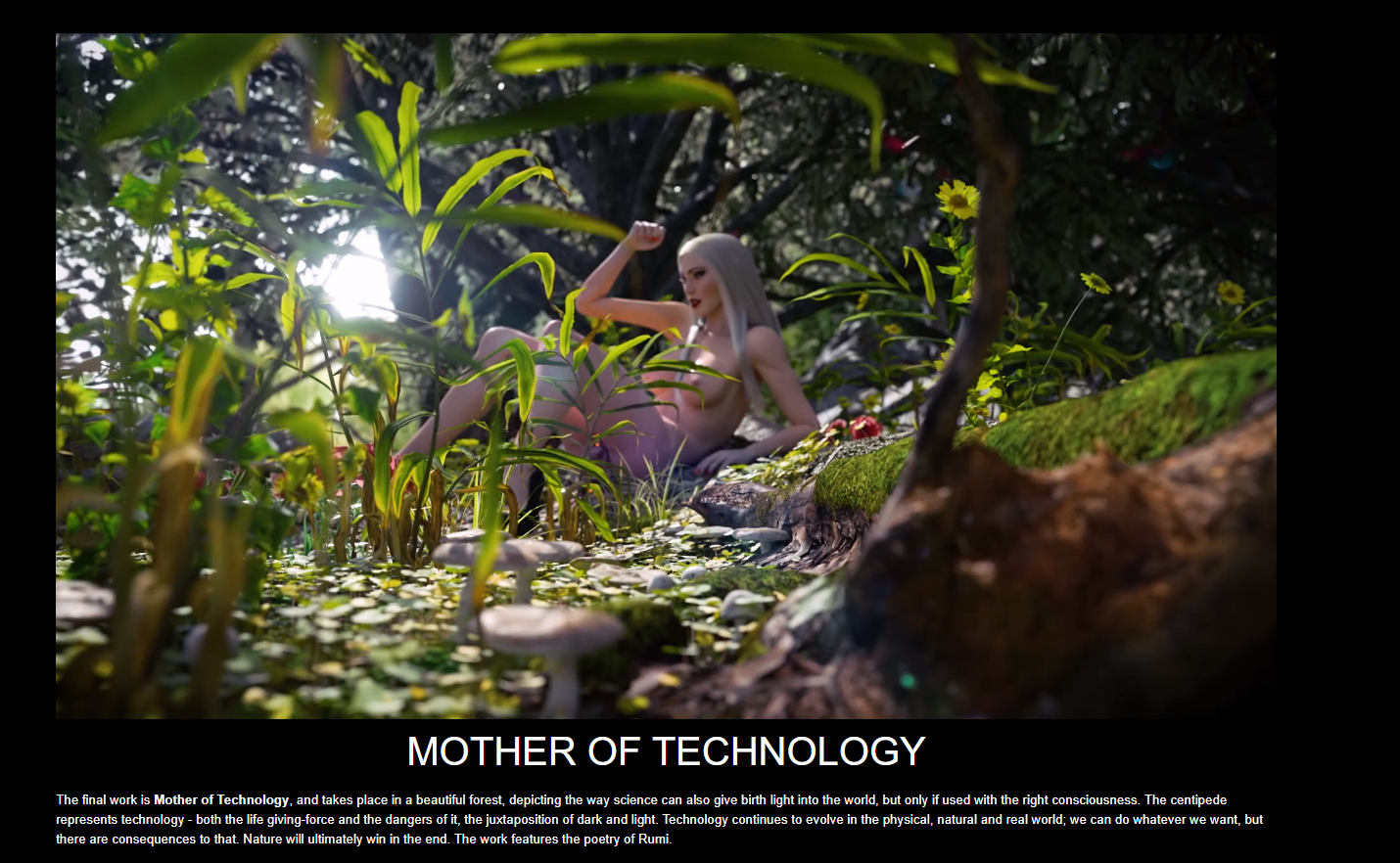 The last piece of the triptych is Mother of Technology.

Unlike the first two projects, this one features beautiful scenery and a stunning forest that shows how even science can bring something wonderful and light into the world, but only if it’s used for the right purpose.

Madonna gives birth to a robotic centipede that represents both sides of technology – life and danger.

The main message of this NFT is that technology is constantly evolving in the real world and that there are lots of consequences to that, but at the end of the day, nature will prevail.

In this video, we can also see the poetry of Rumi included.

Even though Madonna faced a lot of backlash for her NFT collection, there is no doubt that its purpose is very noble.

All of the money the singer makes from the triptych will be forwarded to three different charities.

These include the Voices of Children Foundation (helps the women and children that are affected by the Ukraine war), the City of Joy Foundation (helps victims of violence in the Democratic Republic of Congo), and Black Mama’s Bail Out (provides money for bail for imprisoned caregivers).

Additionally, the crypto platform that helped with creating the project called Moonpay will also donate $100,000 separately to each of these charities.

Madonna is generally known for using her influence and artistic reach to help raise awareness on important issues regarding women and children. She explains that one of her main priorities is to give a voice to people who have been heavily marginalized throughout history.

The three Madonna NFT videos were officially dropped on the NFT marketplace SuperRare on the 11th of May.

Even though Madonna NFT might have been an interesting opportunity for some traders, it’s miles away from being the best NFT to buy in 2022.

For this accolade, we choose the Lucky Block NFT collection – The Platinum Rollers Club.

If you are somewhat emerged in the crypto market, then you might have already heard about Lucky Block’s crypto asset (LBLOCK) achieving huge success at the beginning of 2022.

The price of this token literally skyrocketed in only a few weeks after it was released, and the traders that made their investments in the early stages have seen a mind-boggling 12,000% return on investment.

Looking to repeat that success, the development team has launched the Lucky Block NFT collection.

This collection consists of 10,000 available NFT tokens that can bring some interesting benefits to holders.

To be precise, the amount will equal 2% of the main draw pool. The value of the pool is determined by the user base and the overall volume projection, you can follow all the changes right here.

At the time of writing, a single Lucky Block NFT costs $1,500. You can purchase it exclusively on one of the fastest-growing secondary NFT marketplaces – NFT Launchpad.

When minting this NFT, buyers that are lucky enough might get a ‘Rare Edition’ token (only 25 exist). With this token, the daily prize winners will get double the jackpot amount.

If you want to stay updated on real-time information regarding Lucky Block NFT, we suggest that you join their official Telegram group chat that consists of over 70,000 active members.

Additionally, we have seen an increasing number of celebrities starting to endorse Lucky Block, including the famous boxer that fought Tyson Furry, Dillian White.

Because Lucky Block has a track record of skyrocketing in price and considering that the NFT has lots of utility to it, the Platinum Rollers Club stands out as the best NFT investment for 2022.

Currently, the price is still relatively low, which means it’s the right time to capture it and potentially see a huge profit in the following months.

Although it received a lot of negative criticism, the Madonna NFT collection represents something unique in the NFT community, and we can certainly expect many more similar projects in the upcoming period.

While the Madonna vagina video didn’t really sit well with everyone, there is no doubt that the overall purpose of it is noble, seeing that all the money went to charity.

Projects like this might be interesting to some traders, but if you are looking to make a profit from investing in NFTs, we suggest you check out the Lucky Block NFT collection – it currently has the highest chance to reach a huge value in 2022.